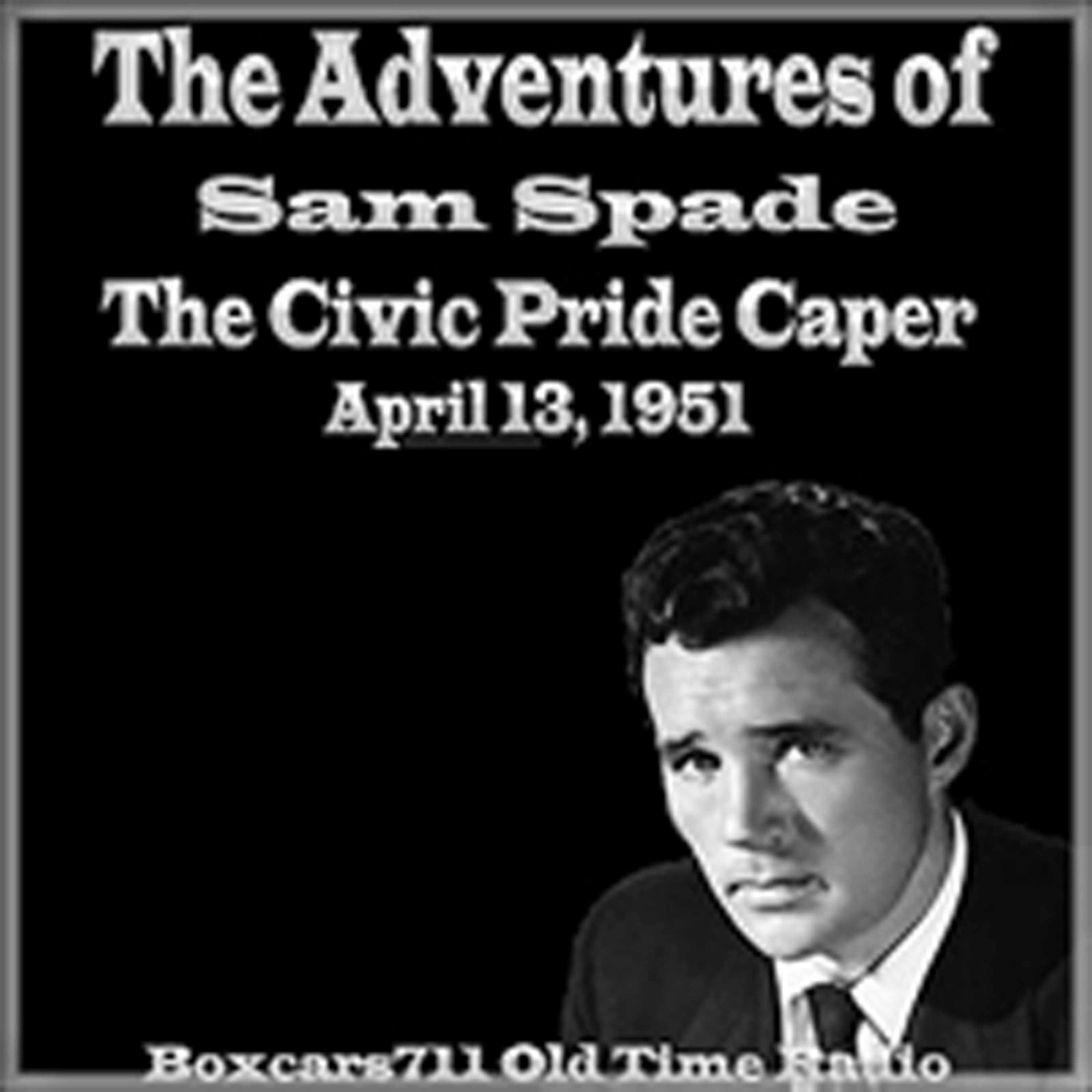 The Civic Pride Caper (Aired April 13, 1951)
The series starred Howard Duff (and later, Steve Dunne) as Sam Spade and Lurene Tuttle as his secretary Effie, and took a considerably more tongue-in-cheek approach to the character than the novel or movie. The series was largely overseen by producer/director William Spier. In 1947, scriptwriters Jason James and Bob Tallman received an Edgar Award for Best Radio Drama from the Mystery Writers of America. Before the series, Sam Spade had been played in radio adaptations of The Maltese Falcon by both Edward G. Robinson (in a 1943 Lux Radio Theater production) and by Bogart himself (in a 1946 Academy Award Theater production), both on CBS. Dashiell Hammett's name was removed from the series in the late 1940s because he was being investigated for involvement with the Communist Party. Later, when Howard Duff's name appeared in the Red Channels book, he was not invited to play the role when the series made the switch to NBC in 1950.
THIS EPISODE:
April 13, 1951. NBC network. "The Civic Pride Caper" Sustaining. After an auditorium collapses, Garrett Welsh, the architect, hires Spade to find out why it happened. The town's building inspector is shot in the back four times! Radio-Television Mirror magazine names Steve Dunne its favorite detective. Steve Dunne, William Spier (producer, editor, director), Shirley Mitchell, John Michael Hayes (writer), Lud Gluskin (composer), Robert Armbruster (conductor), Jack Kruschen, Sidney Miller, Paul Frees, Herbert Rawlinson, Lou Merrill, Dashiell Hammett (creator). 28:59. Episode Notes From The Radio Gold Index.

15d ago2w ago
Subscribe
Unsubscribe
Monthly+
Barry first found music when he borrowed his sister's record collection when he was about eight and was hooked. When Caroline started it was a new beginning, and he listened to all the stations, but Caroline was his favourite by far. Later he became a singer in a band, then started doing discos when he was 18. He joined Caroline in 1977, touring the country with the Caroline Roadshow for 10 years, having great fun. Barry helped with tender trips and worked on the Ross Revenge in '84 and '85. ...
F
Focus on Parenting Podcast

seconds ago30s ago
Subscribe
Unsubscribe
Weekly+
Christian mom or dad, could you use some encouragement and support? Put your ear buds in for this Christian parenting podcast and get practical, faith-based inspiration through all stages of parenting — raising toddlers, navigating the school-age years, preparing for puberty, and seeing your teen soar with confidence. Hosted by Danny Huerta, in every 8 to 15 minute episode, you’ll hear parenting experts share Biblical truths, effective parenting techniques, and useful resources that will hel ...
K
Kate, Tim and Joel

29m ago29m ago
Subscribe
Unsubscribe
Daily
Three of Australia's most respected personalities, Kate Ritchie, Tim Blackwell and Joel Creasey, come together to bring a conversational cheekiness to the drive shift. Joel Creasey joins Kate and Tim as the newest addition to Australia’s renowned drive show, with a combination of the day's hot topics, the best of digital and online and their unique benchmarks and games. Featuring the segments that Nova listeners have grown to love including Monday’s Mailbag, The Wednesday Wheel and the highl ...
J
James Bonding

9d ago1w ago
Subscribe
Unsubscribe
Monthly
Matt and Matt. Bond over Bond. Matt Gourley and Matt Mira love James Bond so much they decided to make a podcast about it. Each episode they invite a guest to dive deep into one movie from the greatest film franchise known to man. Looking for the archives? All episodes older than 6 months can be found exclusively on Stitcher Premium, ad-free. Go to stitcher.com/premium and use promo code BONDING for 1 month free (and $5 off the annual plan!).
Listen to 500+ topics