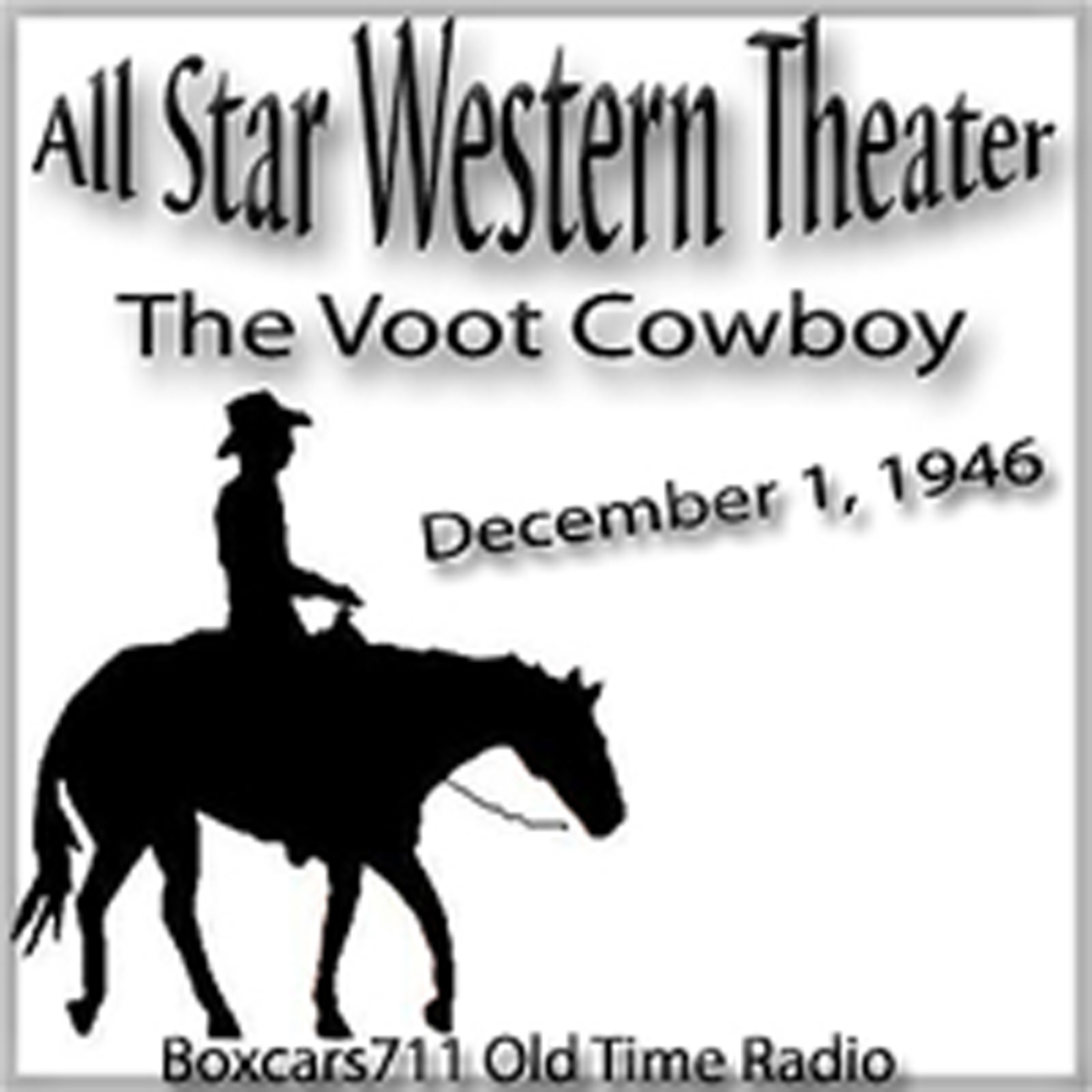 All Star Western Theater - The Voot Cowboy With "Ken Curtis" Aired December 1 1946
The All Star Western Theater is an enjoyable series filled with the humor of guest stars such as Johnny Mack Brown and Smiley Burnett and in the tried and true format of The Roy Rogers Show. The words honest, sincere and un-assuming come to mind. Done live, All Star Western Theater gives the studio audience a good show, and the result is still a happy ride down memory lane. Riding out of the sunny back lots of Hollywood, All Star Western Theatre delivered Republic Western-style entertainment with chuck wagon sized doses of fine music, broad humor and guest appearances by the best of the West. The music was provided by the Riders of the Purple Sage, fronted by Foy Willing, with the help of Kenny Driver, Al Sloey and Johnny Paul.

THIS EPISODE:
December 1, 1946. CBS Pacific network, KNX, Los Angeles aircheck. "The Voot Cowboy". Sponsored by: Weber's Bread. "Benny Dorsey" is looking for a zoot new tune, and "The Riders" are just the ones to give it to him. Ken Curtis, Monty Montana, Joe Forte, Foy Willing and The Riders Of The Purple Sage, Cottonseed Clark (announcer). 30:31. Episode Notes From The Radio Gold Index.

15d ago2w ago
Subscribe
Unsubscribe
Monthly+
Barry first found music when he borrowed his sister's record collection when he was about eight and was hooked. When Caroline started it was a new beginning, and he listened to all the stations, but Caroline was his favourite by far. Later he became a singer in a band, then started doing discos when he was 18. He joined Caroline in 1977, touring the country with the Caroline Roadshow for 10 years, having great fun. Barry helped with tender trips and worked on the Ross Revenge in '84 and '85. ...
K
KZradio הקצה

3d ago3d ago
Subscribe
Unsubscribe
Weekly
DumTeeDum is a weekly podcast about The Archers that features Roifield Brown and fans of the Archers. See acast.com/privacy for privacy and opt-out information.
K
Kate, Tim and Joel

2m ago2m ago
Subscribe
Unsubscribe
Daily
Three of Australia's most respected personalities, Kate Ritchie, Tim Blackwell and Joel Creasey, come together to bring a conversational cheekiness to the drive shift. Joel Creasey joins Kate and Tim as the newest addition to Australia’s renowned drive show, with a combination of the day's hot topics, the best of digital and online and their unique benchmarks and games. Featuring the segments that Nova listeners have grown to love including Monday’s Mailbag, The Wednesday Wheel and the highl ...
Listen to 500+ topics