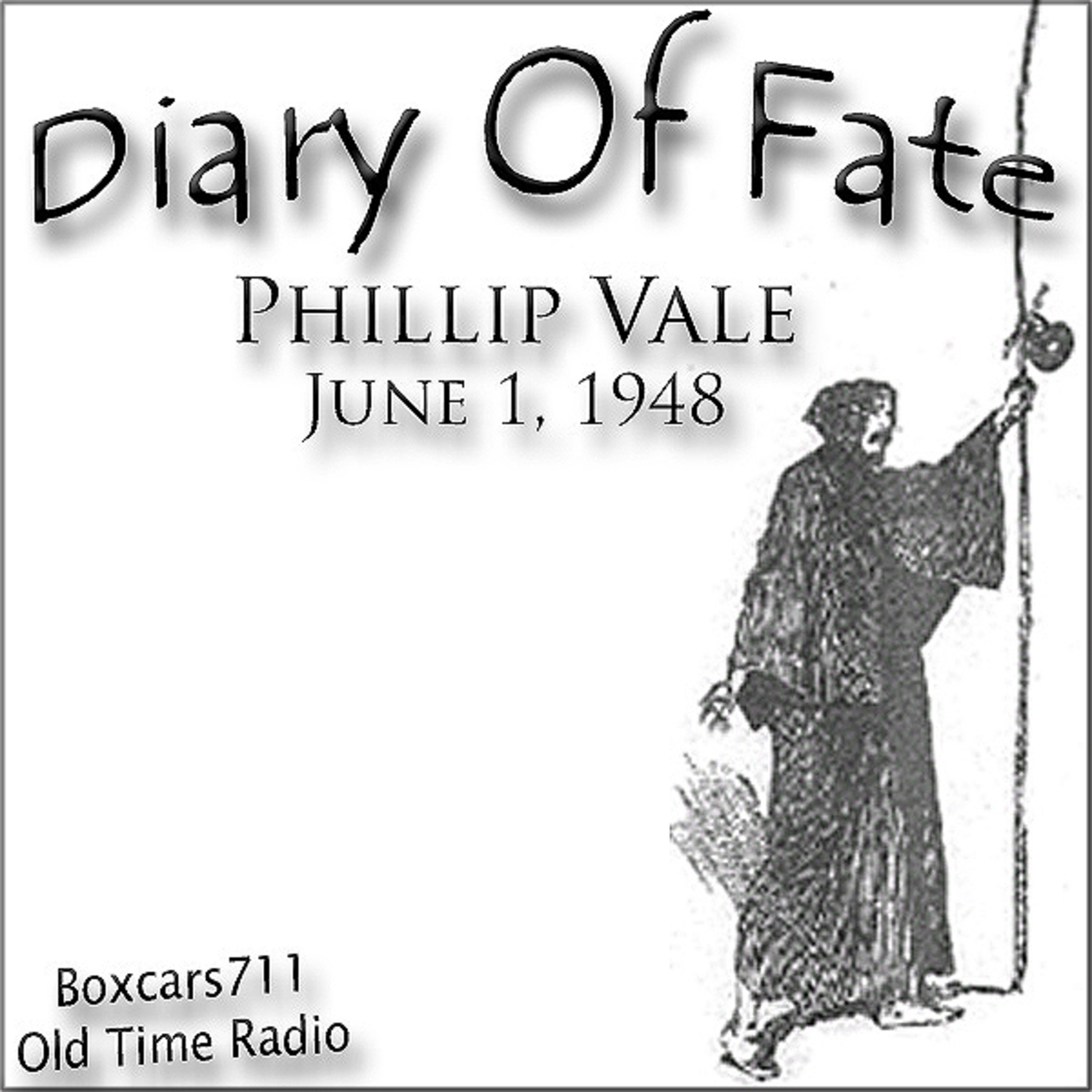 Phillip Vale (Aired June 1, 1948)
The twist with Diary of Fate was the total absence of pretense. The program jumps right to the 'source' of Man's ultimate destiny--Fate itself--in the form of the Guardian of the Diary of Fate. It is within the Diary of Fate, that every soul's fate is painstakingly chronicled by book and page number--or so we're very persuasively given to understand. Fate itself--in this instance, at least--is the great character actor Herbert Lytton, providing the forboding vocal gravitas we might expect from such an all-powerful cosmic force. Produced from Hollywood, the entire production was voiced by primarily west coast actors. Famous Radio and Television promoter Larry Finley produced and syndicated the program to at least some 94 affiliate stations throughout the U.S., Canada and Jamaica. Show Notes From The Digital Deli. B THIS EPISODE: June 1, 1948. Program #25. ABC network, KECA, Los Angeles origination, Finley syndication. "Phillip Vale". Commercials added locally. Book 63, page 209. Phillip Vale decides to kill his wealthy aunt Ruth when he loses $20,000 of her money on a bad stock market investment. The date is subject to correction. Larry Finley (producer), Herb Lytton (as "Fate" and co-producer), Ivan Ditmars (organist), Ray Ehrlenborn (sound effects). 31:01. Episode Notes From The Radio Gold Index.

4d ago4d ago
Subscribe
Unsubscribe
Weekly
RelicRadio.com presents tales of the strange and bizarre, the weird and the wicked. Stories not necessarily of the supernatural, but of the unnatural. Join us for Strange Tales, featuring radio drama at its most mysterious and unusual. Abnormal old time radio!
F
Flashback Requests (Barry James)

15d ago2w ago
Subscribe
Unsubscribe
Weekly
Donate here: http://www.radiostorm.com/donate Subscribe to our Patreon here: http://www.radiostorm.com/patreon Join Topeka's own Marshall Barber as he takes you through the roots of rock and roll with classic soul, R&B, and rock! Vinyl is a large part of each show, as some songs are very hard to find. Support this podcast: https://anchor.fm/radiostorm/support
T
Treasure Island Oldies

3d ago3d ago
Subscribe
Unsubscribe
Weekly
Old Time Rock n Roll is the largest oldies podcast in the world today. Over 2.3 million listeners have enjoyed the huge library of tunes. Host Lee Douglas uses his personal 120,000 song library to spin the classics,as well as the obscure songs of the 50's,60's and early 70's. Whether its doo wop, rockabilly, Rythym and Blues or pop, Old Time Rock n Roll has it all. Listen and be transported back to a time when the biggest problem we had was getting a date for Saturday night.
S
Sideshow Sound Theatre┃Music & Film Soundtrack Podcast

13h ago13h ago
Subscribe
Unsubscribe
Weekly
Eddie Trunk, the most well-known name in hard rock and metal music, brings his insight, commentary, reviews, discussion and in-depth interviews to the podcast world! Join Eddie and his famous friends in rock and entertainment every week for a rollicking good time. To access the entire show archive, go to PodcastOne.com.
T
Too Much Rock

14h ago14h ago
Subscribe
Unsubscribe
Monthly+
Asking comedians about the historic lasts and firsts in their lives as their comedy careers have blossomed.
Listen to 500+ topics