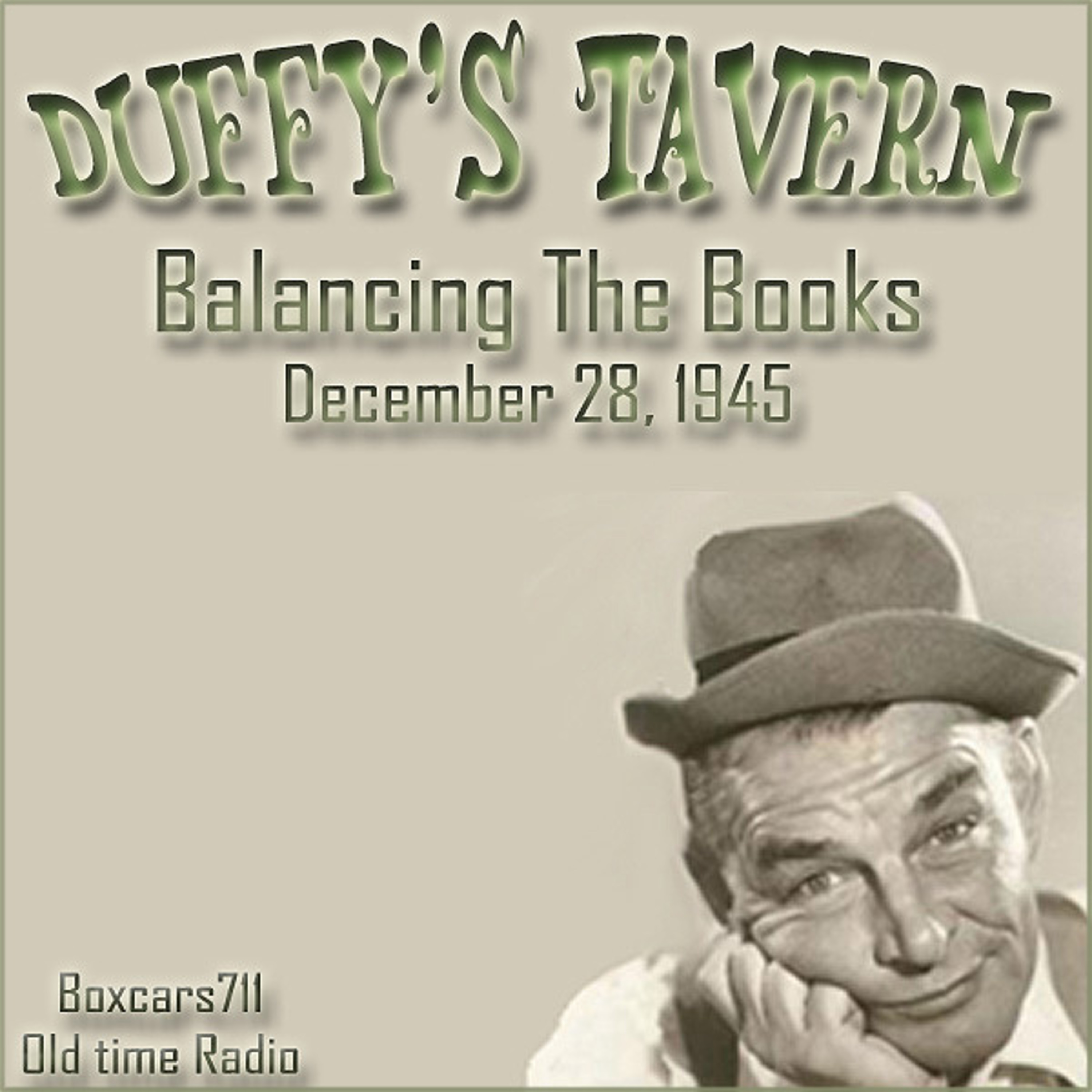 Balancing The Books (Aired December 28, 1945)
Early in the show's life, however, its name was changed — first to Duffy's and, for four episodes, Duffy's Variety. A staffer for Bristol-Myers -- whose Ipana toothpaste was the show's early sponsor—persuaded the company's publicity director to demand the name change because the original title promoted "the hobby of drinking" too much for certain sensibilities. Bristol-Myers eventually admitted the staffer had little to go on other than a handful of protesting letters, and to the delight of fans who never stopped using the original name, anyway — the original title was restored permanently. The name change was often subverted by the Armed Forces Radio Network. When the AFRN rebroadcast those episodes for U.S. servicemen during World War II, the announcer referred to Duffy's Tavern. Radio's Duffy's Tavern didn't translate well to film or television. THIS EPISODE: December 28, 1945. "Balancing The Books" - NBC network origination, AFRS rebroadcast. Archie tries to balance the tavern's books. He and Eddie take inventory, then try to bribe Mr. Schmidlap, the accountant. Ed Gardner, Eddie Green, Charlie Cantor, Sandra Gould, Howard Duff (AFRS announcer). 29:34. Episode Notes From The Radio Gold Index.

14d ago2w ago
Subscribe
Unsubscribe
Monthly+
Donate here: http://www.radiostorm.com/donate Subscribe to our Patreon here: http://www.radiostorm.com/patreon Join Topeka's own Marshall Barber as he takes you through the roots of rock and roll with classic soul, R&B, and rock! Vinyl is a large part of each show, as some songs are very hard to find. Support this podcast: https://anchor.fm/radiostorm/support
F
Flashback Requests (Barry James)

1d ago1d ago
Subscribe
Unsubscribe
Monthly
Barry first found music when he borrowed his sister's record collection when he was about eight and was hooked. When Caroline started it was a new beginning, and he listened to all the stations, but Caroline was his favourite by far. Later he became a singer in a band, then started doing discos when he was 18. He joined Caroline in 1977, touring the country with the Caroline Roadshow for 10 years, having great fun. Barry helped with tender trips and worked on the Ross Revenge in '84 and '85. ...
U
Uncomfortable Conversations with Josh Szeps

10h ago10h ago
Subscribe
Unsubscribe
Daily+
The world has never been more connected. Yet never more divided. We yell at each other from inside our echo chambers. But change doesn’t happen inside an echo chamber. It’s time to get out, to stretch our legs, to step on some land mines. It's time to have an uncomfortable conversation with Josh Szeps.
T
Treasure Island Oldies

14h ago14h ago
Subscribe
Unsubscribe
Weekly
A weekly Podcast that covers events that took place this week in Rock & Roll History; who was in the studio recording what would become a big hit, and spotlight artists that are celebrating birthdays this week. Join me for the entire weekly four hour radio show, Treasure Island Oldies, The Home of Lost Treasures at www.treasureislandoldies.com. On the air every week since 1997,
O
Old Time Rock n Roll

23h ago23h ago
Subscribe
Unsubscribe
Weekly
Old Time Rock n Roll is the largest oldies podcast in the world today. Over 2.3 million listeners have enjoyed the huge library of tunes. Host Lee Douglas uses his personal 120,000 song library to spin the classics,as well as the obscure songs of the 50's,60's and early 70's. Whether its doo wop, rockabilly, Rythym and Blues or pop, Old Time Rock n Roll has it all. Listen and be transported back to a time when the biggest problem we had was getting a date for Saturday night.
T
Too Much Rock

9d ago1w ago
Subscribe
Unsubscribe
Monthly+
The Too Much Rock podcast is a 30-minute journey through the weekly music acquisitions of its creator. It may feature power pop, indie rock, post punk, indie pop, or any other named or unnamed genre.
T
The Eddie Trunk Podcast

22h ago22h ago
Subscribe
Unsubscribe
Daily
Real Punk Radio podcast Network brings you the best in Punk, Rock, Underground Music around! From Classic Oi!, Psychobilly and Hardcore to some Classic Rock n Roll and 90's indie Alt Rock greatness!! With Tons of Live DJ's that like to Talk Music From Garage Rock, to Ska.. We are True MUSIC GEEKS!
S
Spare the Rock, Spoil the Child Playlists