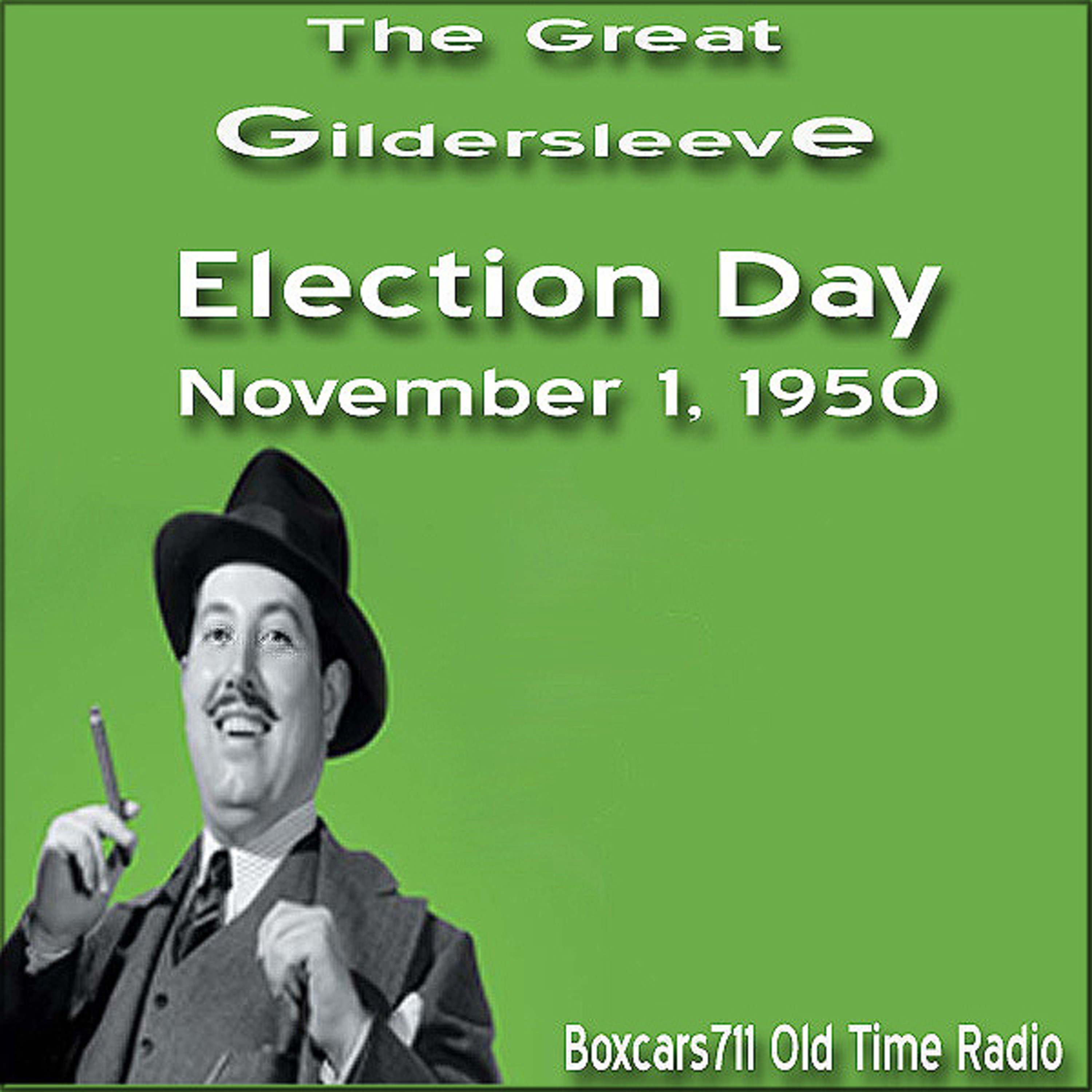 Election Day (Aired November 1, 1950)
The Great Gildersleeve enjoyed its greatest success in the 1940s. Actor Harold Peary played the character during its transition from the parent show into the spin-off and later in a quartet of feature films released at the height of the show's popularity. On Fibber McGee and Molly, Peary's Gildersleeve was a pompous windbag who became a consistent McGee nemesis. "You're a haa-aa-aa-aard man, McGee!" became a Gildersleeve catch phrase. The character was given several conflicting first names on Fibber McGee and Molly, and on one episode his middle name was revealed as Philharmonic. Gildy admits as much at the end of "Gildersleeve's Diary" on the Fibber McGee and Molly series (10/22/40). He soon became so popular that Kraft Foods — looking primarily to promote its Parkay margarine spread — sponsored a new series with Peary's Throckmorton P. Gildersleeve as the central, slightly softened, and slightly befuddled focus of a lively new family. THIS EPISIODE: November 1, 1950. "Election Day" - NBC network. Sponsored by: Kraft Parkay, Kraft Mustards. When Bullard and Terwilliger square off in a mayoral election, Gildersleeve picks the right candidate to back...but he loses the race! Andy White (writer), Arthur Q. Bryan, Bud Hiestand (announcer), Earle Ross, Gale Gordon, John Elliotte (writer), Lillian Randolph, Marylee Robb, Paul West (writer), Richard LeGrand, Robert Armbruster (conductor), Stanley Farrar, Walter Tetley, Willard Waterman. 32:22. Episode Notes From The Radio Gold Index.

3d ago3d ago
Subscribe
Unsubscribe
Weekly
RelicRadio.com presents tales of the strange and bizarre, the weird and the wicked. Stories not necessarily of the supernatural, but of the unnatural. Join us for Strange Tales, featuring radio drama at its most mysterious and unusual. Abnormal old time radio!
F
Flashback Requests (Barry James)

14d ago2w ago
Subscribe
Unsubscribe
Weekly
Donate here: http://www.radiostorm.com/donate Subscribe to our Patreon here: http://www.radiostorm.com/patreon Join Topeka's own Marshall Barber as he takes you through the roots of rock and roll with classic soul, R&B, and rock! Vinyl is a large part of each show, as some songs are very hard to find. Support this podcast: https://anchor.fm/radiostorm/support
T
Treasure Island Oldies

1d ago1d ago
Subscribe
Unsubscribe
Weekly
Old Time Rock n Roll is the largest oldies podcast in the world today. Over 2.3 million listeners have enjoyed the huge library of tunes. Host Lee Douglas uses his personal 120,000 song library to spin the classics,as well as the obscure songs of the 50's,60's and early 70's. Whether its doo wop, rockabilly, Rythym and Blues or pop, Old Time Rock n Roll has it all. Listen and be transported back to a time when the biggest problem we had was getting a date for Saturday night.
S
Sideshow Sound Theatre┃Music & Film Soundtrack Podcast

8d ago1w ago
Subscribe
Unsubscribe
Weekly
Eddie Trunk, the most well-known name in hard rock and metal music, brings his insight, commentary, reviews, discussion and in-depth interviews to the podcast world! Join Eddie and his famous friends in rock and entertainment every week for a rollicking good time. To access the entire show archive, go to PodcastOne.com.
T
Too Much Rock

7d ago1w ago
Subscribe
Unsubscribe
Monthly+
Asking comedians about the historic lasts and firsts in their lives as their comedy careers have blossomed.
Listen to 500+ topics