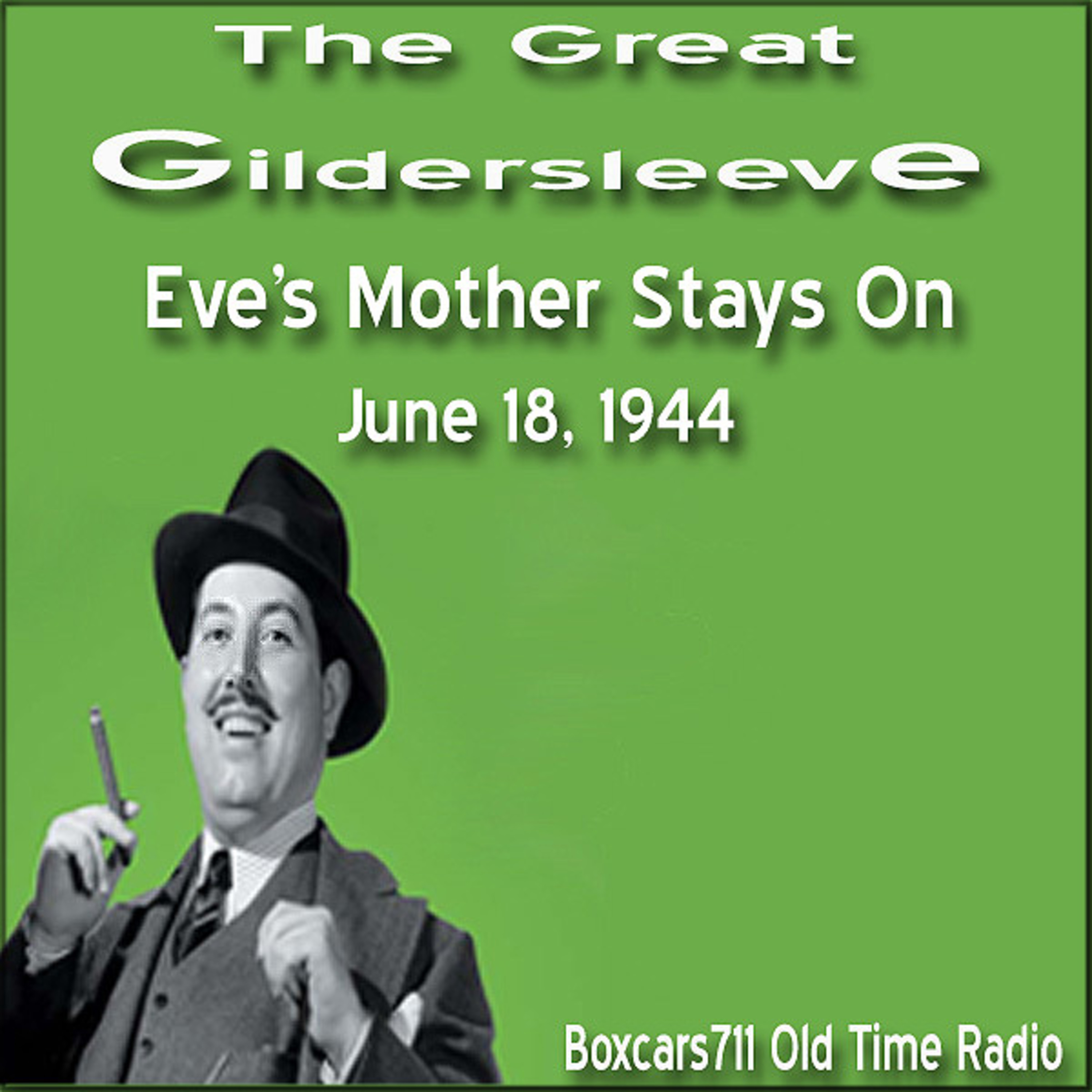 Eve's Mother Stays On (Aired June 18, 1944)
The Great Gildersleeve (1941-1957), initially written by Leonard Lewis Levinson, was one of broadcast history's earliest spin-off programs. Built around a character who had been a staple on the classic radio situation comedy Fibber McGee and Molly, The Great Gildersleeve enjoyed its greatest success in the 1940s. Actor Harold Peary played the character during its transition from the parent show into the spin-off and later in a quartet of feature films released at the height of the show's popularity. On Fibber McGee and Molly, Peary's Gildersleeve was a pompous windbag who became a consistent McGee nemesis. "You're a haa-aa-aa-aard man, McGee!" became a Gildersleeve catch phrase. The character was given several conflicting first names on Fibber McGee and Molly, and on one episode his middle name was revealed as Philharmonic. THIS EPISODE: June 18, 1944. "Eve's Mother Stays On" - NBC network. Sponsored by: Kraft Parkay. Network, sponsored version. Throckmorton is running for Mayor and trying to get rid of his future mother-in-law at the same time. Arthur Q. Bryan, Bea Benaderet, Claude Sweeten (music), Earle Ross, Harold Peary, John Whedon (writer), Ken Carpenter (announcer), Lillian Randolph, Lurene Tuttle, Richard LeGrand, Sam Moore (writer), Shirley Mitchell, Walter Tetley. 29:46. Episode Notes From The Radio Gold Index.

8d ago1w ago
Subscribe
Unsubscribe
Monthly+
Donate here: http://www.radiostorm.com/donate Subscribe to our Patreon here: http://www.radiostorm.com/patreon Join Topeka's own Marshall Barber as he takes you through the roots of rock and roll with classic soul, R&B, and rock! Vinyl is a large part of each show, as some songs are very hard to find. Support this podcast: https://anchor.fm/radiostorm/support
T
Treasure Island Oldies

5d ago5d ago
Subscribe
Unsubscribe
Weekly
Old Time Rock n Roll is the largest oldies podcast in the world today. Over 2.3 million listeners have enjoyed the huge library of tunes. Host Lee Douglas uses his personal 120,000 song library to spin the classics,as well as the obscure songs of the 50's,60's and early 70's. Whether its doo wop, rockabilly, Rythym and Blues or pop, Old Time Rock n Roll has it all. Listen and be transported back to a time when the biggest problem we had was getting a date for Saturday night.
T
Too Much Rock

3d ago3d ago
Subscribe
Unsubscribe
Monthly+
The Too Much Rock podcast is a 30-minute journey through the weekly music acquisitions of its creator. It may feature power pop, indie rock, post punk, indie pop, or any other named or unnamed genre.
T
The Eddie Trunk Podcast

2d ago2d ago
Subscribe
Unsubscribe
Monthly
SPONTANEANATION WITH PAUL F. TOMPKINS is a completely improvised show, from monologue to interview to narrative sketch. Join Paul, his special guests, his incredibly talented improviser friends, and accompanist Eban Schletter for an hour of comedy that none of them ever see coming.
S
Spare the Rock, Spoil the Child Playlists

4h ago4h ago
Subscribe
Unsubscribe
Daily
Three of Australia’s most respected personalities come together for the drive home on Nova. Kate Ritchie, Tim Blackwell and Marty Sheargold bring a conversational cheekiness to the Nova Network. Mixing the hottest topics of the day with the best of the web, hear weekly favourites like Quick Draw, Spin it DJ, The Age Game and a lot more.
C
Coone - Global Dedication