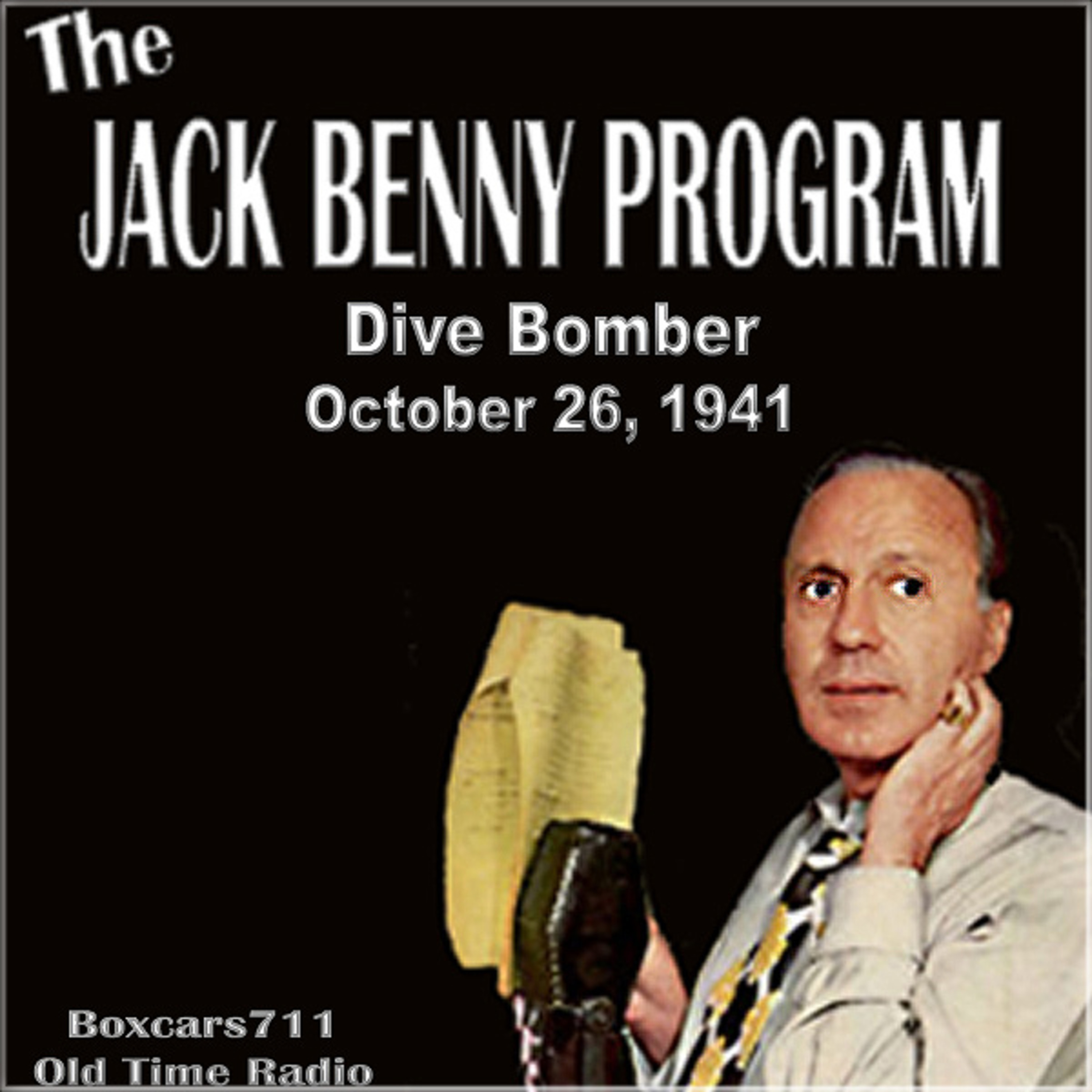 Dive Bomber (Aired October 26, 1941)
Benny had been only a minor vaudeville performer, but he became a national figure with The Jack Benny Program, a weekly radio show which ran from 1932 to 1948 on NBC and from 1949 to 1955 on CBS, and was consistently among the most highly rated programs during most of that run. With Canada Dry Ginger Ale as a sponsor, Benny came to radio on The Canada Dry Program, beginning May 2, 1932, on the NBC Blue Network and continuing there for six months until October 26, moving the show to CBS on October 30. With Ted Weems leading the band, Benny stayed on CBS until January 26, 1933. Arriving at NBC on March 17, Benny did The Chevrolet Program until April 1, 1934. He continued with sponsors General Tires, Jell-O and Grape Nuts. Lucky Strike was the radio sponsor from 1944 to the mid-1950s. The show returned to CBS on January 2, 1949, as part of CBS president William S. Paley's notorious "raid" of NBC talent in 1948-49. There it stayed for the remainder of its radio run, which ended on May 22, 1955. CBS aired reruns of old radio episodes from 1956 to 1958 as The Best of Benny. THIS EPISODE: October 26, 1941. "Dive Bomber". Red network, KFI, Los Angeles aircheck. Sponsored by: Jell-O. Phil and the band play a swinging "Poet and Peasant Overture." The cast does its version of, "Dive Bomber," a story of naval aviation. Jack Benny, Don Wilson, Mary Livingstone, Phil Harris, Dennis Day, Harry Baldwin, Ed Beloin (writer, performer), Dix Davis, Bill Morrow (writer), Mahlon Merrick (conductor). 29:35

21h ago21h ago
Subscribe
Unsubscribe
Weekly
RelicRadio.com presents tales of the strange and bizarre, the weird and the wicked. Stories not necessarily of the supernatural, but of the unnatural. Join us for Strange Tales, featuring radio drama at its most mysterious and unusual. Abnormal old time radio!
F
Flashback Requests (Barry James)

5d ago5d ago
Subscribe
Unsubscribe
Monthly
Barry first found music when he borrowed his sister's record collection when he was about eight and was hooked. When Caroline started it was a new beginning, and he listened to all the stations, but Caroline was his favourite by far. Later he became a singer in a band, then started doing discos when he was 18. He joined Caroline in 1977, touring the country with the Caroline Roadshow for 10 years, having great fun. Barry helped with tender trips and worked on the Ross Revenge in '84 and '85. ...
R
Rockhouse on Oldies 104

12d ago1w ago
Subscribe
Unsubscribe
Weekly
Donate here: http://www.radiostorm.com/donate Subscribe to our Patreon here: http://www.radiostorm.com/patreon Join Topeka's own Marshall Barber as he takes you through the roots of rock and roll with classic soul, R&B, and rock! Vinyl is a large part of each show, as some songs are very hard to find. Support this podcast: https://anchor.fm/radiostorm/support
T
Treasure Island Oldies

10h ago10h ago
Subscribe
Unsubscribe
Weekly
A weekly Podcast that covers events that took place this week in Rock & Roll History; who was in the studio recording what would become a big hit, and spotlight artists that are celebrating birthdays this week. Join me for the entire weekly four hour radio show, Treasure Island Oldies, The Home of Lost Treasures at www.treasureislandoldies.com. On the air every week since 1997,
O
Old Time Rock n Roll

10d ago1w ago
Subscribe
Unsubscribe
Weekly
Old Time Rock n Roll is the largest oldies podcast in the world today. Over 2.3 million listeners have enjoyed the huge library of tunes. Host Lee Douglas uses his personal 120,000 song library to spin the classics,as well as the obscure songs of the 50's,60's and early 70's. Whether its doo wop, rockabilly, Rythym and Blues or pop, Old Time Rock n Roll has it all. Listen and be transported back to a time when the biggest problem we had was getting a date for Saturday night.
S
Sideshow Sound Theatre┃Music & Film Soundtrack Podcast

5d ago5d ago
Subscribe
Unsubscribe
Weekly
Eddie Trunk, the most well-known name in hard rock and metal music, brings his insight, commentary, reviews, discussion and in-depth interviews to the podcast world! Join Eddie and his famous friends in rock and entertainment every week for a rollicking good time. To access the entire show archive, go to PodcastOne.com.
T
Too Much Rock

9h ago9h ago
Subscribe
Unsubscribe
Monthly+
The Too Much Rock podcast is a 30-minute journey through the weekly music acquisitions of its creator. It may feature power pop, indie rock, post punk, indie pop, or any other named or unnamed genre.
T
The Comic's Comic Presents Last Things First

5d ago5d ago
Subscribe
Unsubscribe
Monthly+
Asking comedians about the historic lasts and firsts in their lives as their comedy careers have blossomed.
Listen to 500+ topics