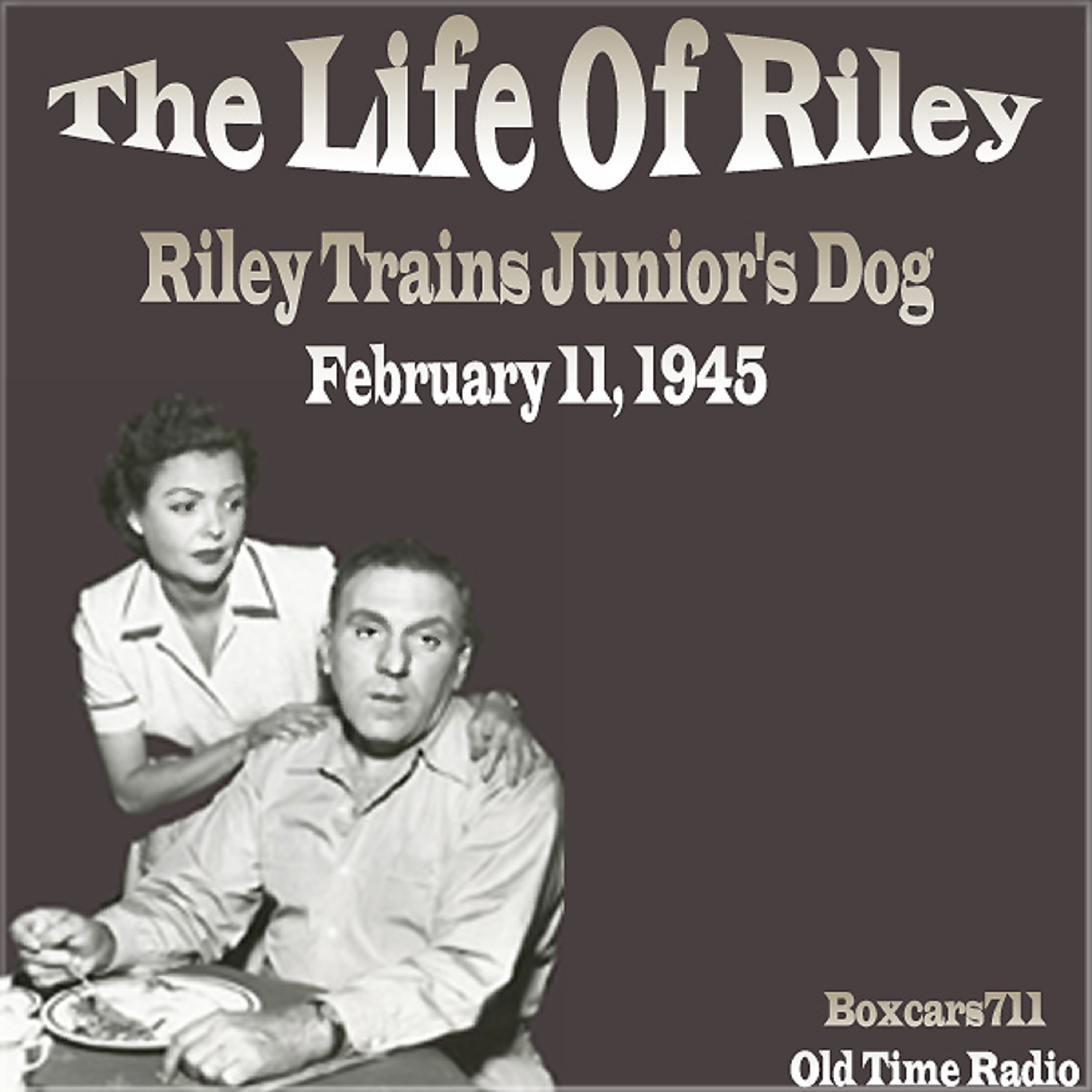 Riley Trains Junior's Dog (Aired February 11, 1945)
The Life of Riley, with William Bendix in the title role, was a popular radio situation comedy series of the 1940s that was adapted into a 1949 feature film and continued as a long-running television series during the 1950s. The show began as a proposed Groucho Marx radio series, The Flotsam Family, but the sponsor balked at what would have been essentially a straight head-of-household role for the comedian. Then producer Irving Brecher saw Bendix as taxicab company owner Tim McGuerin in the movie The McGuerins from Brooklyn (1942). The Flotsam Family was reworked with Bendix cast as blundering Chester A. Riley, riveter at a California aircraft plant, and his frequent exclamation of indignation---"What a revoltin' development this is!"---became one of the most famous catch phrases of the 1940s. The radio series also benefited from the immense popularity of a supporting character, Digby "Digger" O'Dell (John Brown), "the friendly undertaker." THIS EPISODE: February 11, 1945. "Riley Trains Junior's Dog" - Blue network, KECA, Los Angeles aircheck. Sponsored by: The American Meat Institute. Junior gets a new dog and Riley ends up in the doghouse. John Brown, William Bendix, Ken Niles (announcer), Don Bernard (director), Lou Kosloff (music), Irving Brecher (creator, producer), Conrad Binyon, Paula Winslowe. 29:37. Episode Notes From The Radio Gold Index.

5d ago5d ago
Subscribe
Unsubscribe
Weekly
RelicRadio.com presents tales of the strange and bizarre, the weird and the wicked. Stories not necessarily of the supernatural, but of the unnatural. Join us for Strange Tales, featuring radio drama at its most mysterious and unusual. Abnormal old time radio!
F
Flashback Requests (Barry James)

16d ago2w ago
Subscribe
Unsubscribe
Weekly
Donate here: http://www.radiostorm.com/donate Subscribe to our Patreon here: http://www.radiostorm.com/patreon Join Topeka's own Marshall Barber as he takes you through the roots of rock and roll with classic soul, R&B, and rock! Vinyl is a large part of each show, as some songs are very hard to find. Support this podcast: https://anchor.fm/radiostorm/support
T
Treasure Island Oldies

4d ago4d ago
Subscribe
Unsubscribe
Weekly
A weekly Podcast that covers events that took place this week in Rock & Roll History; who was in the studio recording what would become a big hit, and spotlight artists that are celebrating birthdays this week. Join me for the entire weekly four hour radio show, Treasure Island Oldies, The Home of Lost Treasures at www.treasureislandoldies.com. On the air every week since 1997,
O
Old Time Rock n Roll

4d ago4d ago
Subscribe
Unsubscribe
Weekly
Old Time Rock n Roll is the largest oldies podcast in the world today. Over 2.3 million listeners have enjoyed the huge library of tunes. Host Lee Douglas uses his personal 120,000 song library to spin the classics,as well as the obscure songs of the 50's,60's and early 70's. Whether its doo wop, rockabilly, Rythym and Blues or pop, Old Time Rock n Roll has it all. Listen and be transported back to a time when the biggest problem we had was getting a date for Saturday night.
S
Sideshow Sound Theatre┃Music & Film Soundtrack Podcast

1d ago1d ago
Subscribe
Unsubscribe
Weekly
Eddie Trunk, the most well-known name in hard rock and metal music, brings his insight, commentary, reviews, discussion and in-depth interviews to the podcast world! Join Eddie and his famous friends in rock and entertainment every week for a rollicking good time. To access the entire show archive, go to PodcastOne.com.
T
Too Much Rock

4d ago4d ago
Subscribe
Unsubscribe
Monthly+
The Too Much Rock podcast is a 30-minute journey through the weekly music acquisitions of its creator. It may feature power pop, indie rock, post punk, indie pop, or any other named or unnamed genre.
T
The Comic's Comic Presents Last Things First

23h ago23h ago
Subscribe
Unsubscribe
Monthly+
Asking comedians about the historic lasts and firsts in their lives as their comedy careers have blossomed.
Listen to 500+ topics