Talk Liberty Freedom Classical Liberal Bob Zadek News Libertarian
By Bob Zadek and The Bob Zadek Show. Discovered by Player FM and our community — copyright is owned by the publisher, not Player FM, and audio is streamed directly from their servers. Hit the Subscribe button to track updates in Player FM, or paste the feed URL into other podcast apps.


MP3•Episode home
By Bob Zadek and The Bob Zadek Show. Discovered by Player FM and our community — copyright is owned by the publisher, not Player FM, and audio is streamed directly from their servers. Hit the Subscribe button to track updates in Player FM, or paste the feed URL into other podcast apps.

“A Law repugnant to the Constitution is void.”

Constitution geeks, rejoice. The book you’ve been waiting for has arrived. Repugnant Laws by Keith Whittington (William Nelson Cromwell Professor of Politics at Princeton) takes readers under the hood of our system of checks and balances – examining “Judicial Review of Acts of Congress from the Founding to the Present.”

Whittington, who writes for my favorite legal blog the Volokh Conspiracy, joins me live. He has written a great deal about impeachment lately, but his real constitutional expertise is the main check that the judiciary exercises over the legislature – its ability to overturn state and federal laws which it deems unconstitutional.

Since then, the makeup of the courts has influenced the direction of policy in subtle but powerful ways. Whittington’s book analyzes thousands of cases in which the Supreme Court either upheld or overturned federal laws. He applies the precision of a scientist (a political scientist, that is) to questions of politicization and examines whether an activist judiciary is antidemocratic.

RealClear Politics reports that President Trump is “Remaking the Federal Judiciary at a Historic Rate”. According to Whittington’s data, this will influence political outcomes for decades to come. But while judicial appointees may tend to side with the dominant political coalitions, he notes that they do not make their decisions along strict ideological lines.

I have previously explored whether the courts should exercise restraint in allowing lawmakers to craft a wide range of legislation (see Overruling Government Overreach: Damon Root on the Libertarian Legal Movement).

I have also argued in favor of a more activist judiciary, which defends individual rights from being overridden by majority rule, and believe that the courts are the last bulwark against excessive democracy. However, everyone seems to be in favor of judicial activism when it favors his or her politics. That explains why restraint and “minimalism” are in vogue among liberals when the conservatives are in power, and vice versa.

Find out why Randy Barnett says Repugnant Laws is “Simply a must-read for any serious student of our Constitution and how it actually works.”

Listen to hear the condensed version of Whittington’s monumental findings, or read the transcript here. 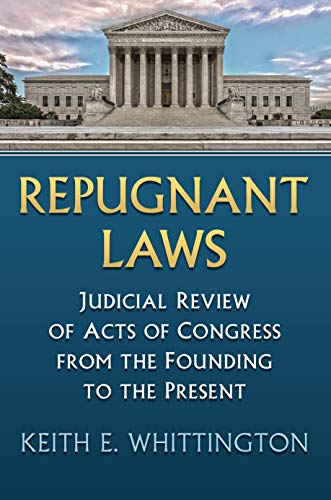 Repugnant Laws: Judicial Review of Acts of Congress from the Founding to the Present (Constitutional Thinking) By Keith E. Whittington

6d ago6d ago
Subscribe
Unsubscribe
Weekly
State of Belief is a weekly radio show that explores the intersection of religion with politics, culture, media, and activism, and promotes diverse religious voices in a religiously pluralistic world.
T
To the Point

1d ago1d ago
Subscribe
Unsubscribe
Weekly
A weekly reality-check on the issues Americans care about most. Host Warren Olney draws on his decades of experience to explore the people and issues shaping – and disrupting - our world. How did everything change so fast? Where are we headed? The...
C
Contra Krugman

4d ago4d ago
Subscribe
Unsubscribe
Weekly
Every episode we blast anyone who gets in our way. We bring critical thinking, skepticism, and irreverence to any topic that makes the news, makes it big, or makes us mad. It’s skeptical, it’s political and there is no welcome mat.
D
Diane Rehm: On My Mind

3d ago3d ago
Subscribe
Unsubscribe
Weekly
Diane Rehm’s weekly podcast features newsmakers, writers, artists and thinkers on the issues she cares about most: what’s going on in Washington, ideas that inform, and the latest on living well as we live longer.
T
The World

3h ago3h ago
Subscribe
Unsubscribe
Daily
Host Marco Werman and his team of producers bring you the world's most interesting stories that remind us just how small our planet really is.
T
The Guardian’s Brexit Means ...

28d ago4w ago
Subscribe
Unsubscribe
Monthly
We delve into the nitty gritty of Brexit and try to make some sort of sense of it, bringing you episodes as and when you need them. We’ll be hearing from Britons and Europeans, leavers and remainers, politicians and ordinary people, economists, businessmen, lawyers, researchers, campaigners and many more about what Brexit means for them, for the UK and for the EU, how it might work – and how it might not. It's a podcast that can’t get enough of experts ... and we want to hear from you too
E
Eddie Jason & Chris: Interviews and Current Events

4d ago4d ago
Subscribe
Unsubscribe
Weekly
Live from Denver, Colorado Eddie Jason & Chris is a weekly podcast delivering current events, hot topics and interviews with musicians and newsmakers. You never know what you'll get with EJC, but we can not confidently assure you that it will be entertaining. Get a weekly dose of EJC and subscribe now and leave a review! Join the show live on idobi Radio every Monday night at 8pm ET. www.idobi.com www.ejcshow.com www.facebook.com/EJCshow @EJCshow on Twitter
W
World Story of the Day : NPR

2h ago2h ago
Subscribe
Unsubscribe
Daily+
Go behind the headlines: From the economy and health care to politics and the environment – and so much more – On Point hosts Meghna Chakrabarti and David Folkenflik speak with newsmakers and real people about the issues that matter most. On Point is produced by WBUR for NPR.
Listen to 500+ topics