To give you the best possible experience, this site uses cookies. Review our Privacy Policy and Terms of Service to learn more. Got it!
T
The Wealth Formula Podcast by Buck Joffrey – Wealth Formula

Trading Buck Joffrey Real Estate Self-Improvement Entrepreneur Business Personal Finances Lifestyle Podcasting Education
By Buck Joffrey. Discovered by Player FM and our community — copyright is owned by the publisher, not Player FM, and audio is streamed directly from their servers. Hit the Subscribe button to track updates in Player FM, or paste the feed URL into other podcast apps.


MP3•Episode home
By Buck Joffrey. Discovered by Player FM and our community — copyright is owned by the publisher, not Player FM, and audio is streamed directly from their servers. Hit the Subscribe button to track updates in Player FM, or paste the feed URL into other podcast apps. 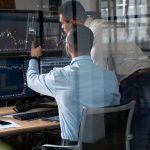 If you have been ignoring distributed ledger technology, you will regret it if you don’t start paying attention.

I understand why people get suspicious of the space. The cryptocurrency ecosystem is full of scammers and hype. Talk of “lambos” and “mooning” can hardly be taken seriously by sophisticated investors.

But amidst the din, lies technology that will fundamentally transform the world. I see the current crypto market as very similar to what happened in the 90s with the dawn of the internet and related technology companies.

Yes…most of the dotcoms went out of business. There was ridiculous hype and valuations of companies that had no revenue-generating product and certainly didn’t even come close to making money.

And when the dotcom crash came, the skeptics all said, “I told you so”. Indeed, they were right about the hysteria. But if they ignored the technology completely, they also missed out on early investments into companies that would eventually become the largest companies in the world.

Recovering from the ashes of the dotcom debacle were companies like Amazon, Google, and Apple to name a few. The dotcom period of the 90s was, therefore, hardly a failure.

Cryptocurrency skeptics look at the current technology craze the same way. However, just like in the dotcom era, there will be some big winners that come out of the frenzy and will become household names. Don’t you want a chance to be part of that?… to go back in time and invest in companies like Amazon and Google in their infancy?

If so, you have to change your perspective on what’s happening now. Try to weed through the useless stuff like dogecoin and start looking at these projects like you would look at any other project in which you might invest.

Learn, at a high level, what this whole distributed world is all about and why it’s such a big deal. Then learn about individual projects. Look at them like you would any other investment. Who are the developers? What is their mission? What do they aim to do and what have they already done?

Cryptocurrency is not going away. Bitcoin is here to stay and will become a globally recognized commodity like gold someday. And while most other projects will die, others will become the fabric of a new decentralized world. As an investor, opportunities like these to be part of the new evolving economy don’t happen very often and may never happen again in our lifetime.

I recognize that and, while I have no idea who the winners and losers will be, I can tell you that Hedera (Hashgraph) is my personal pick for a company that will become a household name over the next few years. And, full disclaimer, its native token HBAR, is by far and away my biggest cryptocurrency bag.

In this episode of Wealth Formula Podcast, you will learn why I’m so bullish on Hedera as I welcome back co-founder and CEO Mance Harmon to the show. Don’t miss it!

Mance Harmon is an experienced technology executive and entrepreneur with more than 20 years of strategic leadership experience in multi-national corporations, government agencies, and high-tech startups, and is Co-founder and CEO of Hedera. His prior experience includes serving as the Head of Architecture and Labs at Ping Identity, Founder and CEO of two tech startups, the senior executive for product security at a $1.7B revenue organization, Program Manager for a very-large scale software program for the Missile Defense Agency, the Course Director for Cybersecurity at the US Air Force Academy, and research scientist in Machine Learning at Wright Laboratory. Mance received a MS in Computer Science from the University of Massachusetts and a BS in Computer Science from Mississippi State University.

10m ago10m ago
Subscribe
Unsubscribe
Daily
Save more and spend less is more than just a motto for money expert Clark Howard; it’s a way of life. Clark and his crew — Team Clark — are on a mission to empower people to take control of their personal finances by providing money-saving tips, consumer advice, hot deals and economic news to help everyone achieve financial freedom. Clark is a nationally syndicated radio talk show host and a consumer reporter for television stations around the country. His podcast, The Clark Howard Show, rec ...
S
SUCCESS Podcasts

3m ago3m ago
Subscribe
Unsubscribe
Weekly+
SUCCESS Podcasts are shows for goal-oriented achievers. Hear from our Editorial Board about how they've achieved great heights and what they're doing to continue to climb.
T
The Stacking Benjamins Show

6h ago6h ago
Subscribe
Unsubscribe
Weekly+
According to FastCompany, "the Stacking Benjamins podcast...strikes a great balance of fun and functional." Created live from Joe's mom's half-finished basement....you'll hear a parade of financial headlines, personal finance experts, creatives, and people with stories that inspire us. Every Monday, Wednesday, and Friday, hosts Joe Saul-Sehy & OG meet at the card table and bring you guests, trivia, your letters about saving, investing, and risk management, and much more. Academy of Podcast w ...
P
Paisa Vaisa with Anupam Gupta

8h ago8h ago
Subscribe
Unsubscribe
Weekly
The Paisa Vaisa podcast helps you understand all things money so that you can make well-informed financial decisions. Understand the basics every week as host, Anupam Gupta, talks with experts across a wide spectrum of the banking and financial services industry: CIOs, CEOs, startup founders, bloggers, advisers, even kids - all of them are part of the awesome line up of guests on the show.
M
Money Confidential

5h ago5h ago
Subscribe
Unsubscribe
Weekly
Money Confidential, a new podcast from Real Simple, explores the many aspects of money: making it, saving it, investing it, giving it, spending it and—sometimes, hardest of all—talking about it. Each week, Stefanie O’Connell Rodriguez, a nationally recognized money expert, delves into your (confidential) money problems and delivers smart, practical, and completely doable solutions that will help you work toward your ultimate financial goals. She cuts through the confusion of investing beyond ...
E
Exchanges at Goldman Sachs

6m ago6m ago
Subscribe
Unsubscribe
Weekly+
In each episode of "Exchanges at Goldman Sachs," people from the firm share their insights on developments shaping industries, markets and the global economy.
T
The Autoblog Podcast

3h ago3h ago
Subscribe
Unsubscribe
Weekly+
The Hustle presents - My First Million. A podcast where we brainstorm new business ideas based on trends & opportunities we see in the market. Sometimes we have famous guests, and they do it with us.
M
Money Box

2d ago2d ago
Subscribe
Unsubscribe
Weekly+
The latest news from the world of personal finance plus advice for those trying to make the most of their money.
T
The Relentless: Creating Experiences That Go Beyond Transactions

5d ago5d ago
Subscribe
Unsubscribe
Monthly
The Relentless is a podcast from Century21 Real Estate and Slate Studios that rethinks business, redefines success, and reimagines customer experiences. In Season 2, podcast host, author, and entrepreneur Kristen Meinzer talks to experts and thought leaders from a variety of industries about surprising ways businesses and entrepreneurs are redefining hospitality and delivering extraordinary experiences to customers. Be sure to check out Season 1 to hear host Dr. Julie Gurner and inspiring bu ...
Listen to 500+ topics